Draftsman is a Ruby gem that lets you create draft versions of your database records. If you’re developing a system in need of simple drafts or a publishing approval queue, then Draftsman just might be what you need.

I built Draftsman to handle the draft logic in Live Editor. Because draft logic gets complicated pretty quickly, I felt that this warranted its own gem with its own set of tests. Plus this was a great opportunity to share a piece of Live Editor with the open source community!

Live Editor uses the excellent PaperTrail gem for publication revision tracking, so I built the API behind Draftsman to work much like PaperTrail.

A taste of how it works

Have a read of the README to see more examples of how to work with the Draftsman gem.

To get up and running with Draftsman, you generally have to do a few things:

More specific installation instructions are available at the GitHub project.

The Draftsman API requires you to be explicit about when you want to save data as a draft. It provides these persistence methods on your models containing has_drafts:

draft_creation and draft_update work like ActiveRecord’s save and update methods: they validate data in the model, run callbacks, and return true or false if everything saved successfully.

By calling draft_creation, draft_update, and draft_destroy, you’re effectively storing a copy of the record with drafted changes in the drafts table.

You can access these drafts through a query directly on the Draftsman::Draft class or through an instance method called draft on your model objects.

Once you have a draft record, you can call revert! on it to undo the draft or publish! to publish the changes to the main record.

Once you’re living in the brave new world of drafts, you’ll want to query your model data differently depending on where you are in the application.

Here is a quick listing of scopes that Draftsman adds to your model when you add has_drafts to it:

Typically, the live scope is used in the “admin” section of your application because it limits the query to records that have not been put in the trash (or draft_destroyed, to use Draftsman terminology).

When you want to show only published data (usually in the public or non-admin area of your application), you should use the published scope to query your data.

In the admin area of your application, you’ll most likely want to load your data in a mixed state:

The way to accomplish this is through the reify method on each record’s draft. Take a look at these sample index and show actions for a posts admin area:

Here, reify returns a Post object with the drafted data loaded in. If any Post record is not a draft, then nothing is done.

All drafts in one spot

Live Editor, using Draftsman under the hood, allows admins to browse to a Drafts section that lists all drafts polymorphically, no matter if the drafts are of content, files, or design elements. 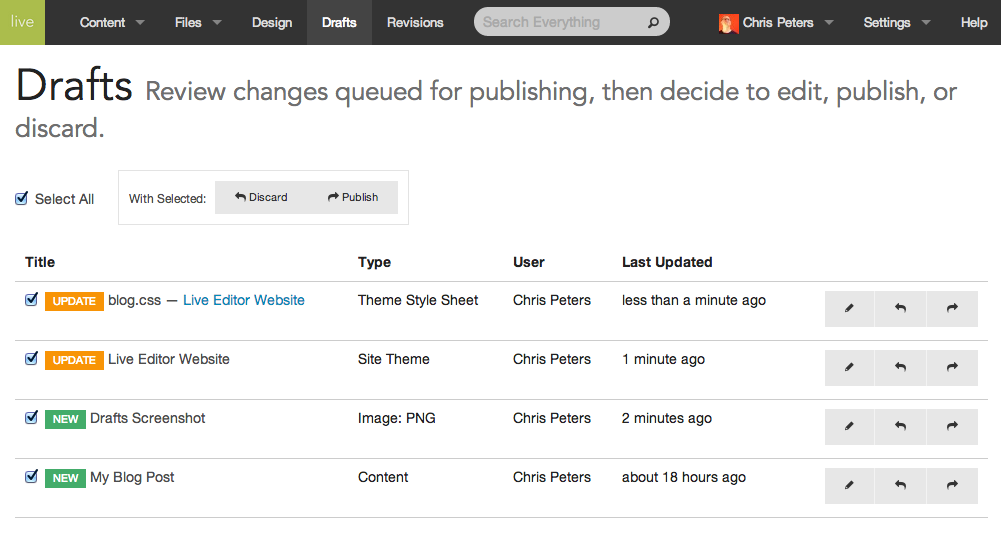 That way, you can review everything that’s in progress and publish or revert multiple drafts at once, no matter the type of content.

Try doing that in WordPress!

Other features of Draftsman

There is more to this gem that I won’t cover in this introduction. Some features that I didn’t mention are as follows: